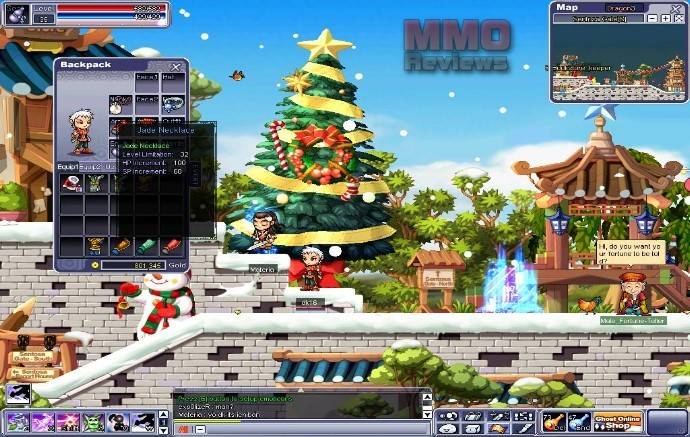 Ghost Online is a fast paced 2D Side-scrolling fantasy MMORPG. The game plays much like it’s competitors, but unfortunately that’s about it, as the game has very few unique features. The game is still a worthy alternative to the other side scrolling MMORPGs and is well worth checking out.

Actually, with the USA version down, the only way to play is the Malasyan or asian version.

Lord Tai He and his apprentices rid the world of Demons, but Tai He himself had used forbidden magic that corrupted his soul. So he had to go to the western lands, to find the sacred herb to cleanse them. The player is Tai He for a short time, learning the basics in Batu Caves. After defeating a clone, Tai He eats the herb, dies and is reborn as your character.

In the game, players defend the "World" from ghost monsters and develop their character's skills and abilities. There is a soul system that allows players absorb souls from monsters. Players can interact with others in many ways, such as through chatting, trading. Groups of players can band together in parties to hunt monsters, and share the rewards. Players can fight each other with the game PvP system. Players can also band in a guild to battle with other guilds. Ghost Online also many quests, some of which allow the player to obtain new skills.

Peasant: All characters begin the game as Peasants. This is when players are given their first skills such as run, high jump, meditate and palm force, which carry over to their next class. Once the player has reached level ten, a job ascension will become available. The player can then choose to either become a "Warrior, "Assassin", or "Magician/Taoist" from their respective job NPCs.

Warrior: The Warrior class is the main melee class of Ghost Online. The class offers a high amount of defense and offense. They do not have many ranged attacks, so they are forced to approach their target head-on in order to fight. Warriors can battle with a sword, a basic, melee weapon with high attack power, or a saber, another melee weapon with even greater attack power than its counterpart. Sword-type skills are more hit- and target-amount oriented, Saber-type focus on utilizing the Saber's status as the physically strongest weapon, and focusing the damage on fewer monsters, contrary to the sword's.

Assassin: The Assassin class is the most agile and stealthiest class, opting to outmaneuver their opponents rather than attack bluntly. Players can choose to wield a claw, a fast melee weapon, or a glove, a ranged weapon using throwing stars. Different varieties of throwing stars (with different bonuses to player attack (ATK) power) are bought at stores, and are used up as glove-users fight with them. Assassins serve as both a ranged and a melee class, something the other two classes lack. Claw assassins seem to be more single-target oriented, having only one mob-attacking skill (gained at level 18), where glove assassins' skills are highly capable of taking on multiple targets. This class becomes very powerful after level 75 and they do extremely high damage due to having maxed mastery.

Magician/Taoist: The Magician class is the magic user of Ghost Online, focusing on ranged, magical attacks to fight. A Magician may use a fan, the weapon with the higher magic attack, or a staff, the weapon with the higher physical attack. Fan users usually start out with fire-based magics, and staff users use ice-based ones. Fan magic gets stronger than staff magic as the player levels, but the staff's ice-based magic has the advantage of having a random freeze probability on monsters. Magician also serve as a slightly more defense-capable class due to their ability to blind monsters, teleport from danger, and raise the defense stat.

Goliath: The Goliath class is a class that is a close combat class. They use axes and wheels. Though skilled in melee they do not have a very high chance of winning against Taoists and Assassins.